Have a childhood savings bond? Here’s what you can do it 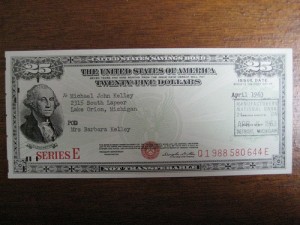 Although it wasn’t always a welcome gift, many children got savings bonds for birthdays and other holidays. The goal behind them, in most cases, was to have something ready when it was time to pay for college but, let’s be honest, most of us wanted some Legos or Barbie dolls instead.

Savings bonds have been replaced by high-interest earning options like 529 plans these days, but they haven’t disappeared completely. In fact, most people have at least one or two (or more) of them sitting in a drawer or locked away in a safety deposit box somewhere. If that’s true, the good news is that your savings bond is definitely still worth something.

Savings bonds earn interest over 30 years and, once they mature, pay-out interest every six months. Depending on how long it’s been sitting in that drawer, there’s a chance you’re actually still making money right now.

There are several types of savings bonds, so the first thing to do is figure out which kind that you actually have before you make any move to cash it out. The type that you have should be clearly specified in the title and, if you got it during the 1960s, 1970s or 1980s, more than likely it’s either an EE or I bond.

An EE bond is actually quite similar to a savings account. Back in the day, they were sold half of their face value so, it was a $100 bond, the person who gave it to you paid $50 for it. This type of bond continue to accrue interest even after the face value is reached however, so that $100 bond might now be worth more.

I bonds are similar to EE bonds but their interest rate is determined by a combination of the actual fixed rate they were issued at as well as the rate of inflation, meaning that the bond holder has a little bit of protection from cost of living increases.

In order to find out what your bond is actually worth, surfing online to the Treasury Direct website is your best idea. Once you know, you have the choice of either cash in your bond or continuing to let the shore and earn interest.

If your bond hasn’t completely matured, keep in mind that there are penalties for cashing in early. During the first 5 years, for example, you’ll lose 3 months’ worth of interest if you cash it in early. The earliest you can cash in any type of savings bond is after 1 here and, after 5, there are no longer any penalties for cashing it in early. Also, if the bond that you hold is over 30 years old, you should cash in because it isn’t earning interest anymore.

When you do cash your bond you’ll have to pay federal taxes but not state or local taxes. Keep in mind that there are some exemptions and ask about them when you cash in, including any bonds that were issued after 1989  used to pay for higher education expenses. In general, most banks will be able to cash a bond for you but, if they can’t, ask them to help you find one that can. When you do find one they’ll ask you to fill out some tax forms as well as prove your identity, so be prepared to do that.